Miami’s special teams were not very special on Friday.

No. 14 Western Michigan scored twice on the power play. No. 20 Miami had zero goals on the man-advantage despite a five-minute 5-on-4 at the beginning of the third period. 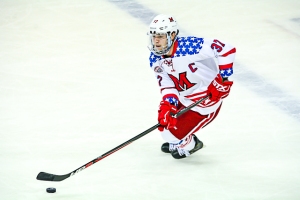 Those tallies were the difference as the Broncos edged the RedHawks, 4-3 at Lawson Arena in a weekend series opener.

Miami extended its winless streak to seven games (0-3-4) while WMU is now unbeaten in its last nine.

Josh Melnick missed just the second game of his RedHawks career. He was out with an apparent lower body injury.

RECAP: The Broncos’ Colt Conrad penetrated from the point and wristed one from the slot into the far corner of the net on the power play to open the scoring 10:27 into the first period.

Miami (9-8-4) tied it 91 seconds later when Gordie Green and Karch Bachman played give-and-go entering the offensive zone, and Bachman threaded a pass to Green at the side of the net for a tap-in.

WMU (12-6-1) jumped ahead again when Ethen Frank fielded a pass through the slot on his backhand, pivoted and threw it in at 1:36 of the second period.

Frank set up Hugh McGing off a break with 4:12 remaining in the middle stanza.

Miami deficit to one when Bachman slid a pass from along the end boards to Green, who shoveled it home, making it 3-2 with 12:15 left in regulation.

Passolt put WMU back up by two with his second goal of the night on a 4-on-3 with 8:17 remaining. 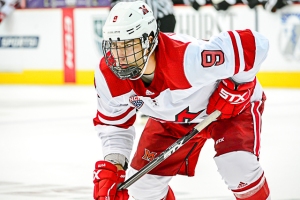 Just 82 seconds later, the RedHawks’ Scott Corbett stole the puck in the corner and centered to Brian Hawkinson, who capped off the scoring.

STATS: Green scored twice and has three goals in two games. He went through a nine-game stretch without finding the net prior to that, so his rejuvenated scoring is welcome for Miami.

Bachman also finished with two points, both on assists. It was his first career multi-assist game.

— Grant Hutton had gone eight consecutive games without a point but he picked up a helper and has at least one in three straight, going 0-4-4.

— Miami was on the power play for 7:39 but generated just three shots.

— The RedHawks have allowed 12 power play goals in their last eight games and are just 63.6 percent on the penalty kill in that span.

— Opponents have scored against MU in 10 straight periods.

The CBS College Sports analyst said that Miami defenseman Alec Mahalak will win conference player of the year one day.

Mahalak did play one of his better games of the season on Friday.

— Starman was very complementary of a number of RedHawks players, including Bray Crowder, Carter Johnson and Derek Daschke.

— Starman also spoke highly of these programs’ futures, saying “the best days were ahead” for both Miami and Western Michigan.

— Bachman’s speed once again resulted in a goal, as he won the race to his self-pass along the boards and eventually spooned one to Green for the marker.

— What a play by Corbett to set up Hawkinson’s goal. He stole the puck in seemingly in one motion thrust the puck to the edge of the crease where Hawkinson buried it.

— Yes, Melnick is one of Miami’s better faceoff men, but 21-48 in the circle? Really? Overall the RedHawks have been much better on draws than in recent seasons.

— The penalty kill has been brutal. On Thanksgiving, MU was 84.5 percent on the PK for the season. That number has plummeted to 76.5 since. Miami has allowed 10 power play goals in six games while scoring just four PPGs in that stretch.

LINEUP CHANGES: Melnick was the only player not in the lineup from Saturday’s game against Providence, and Johnson dressed in his place after sitting the last two.

He played on the line with Bachman and Green.

FINAL THOUGHTS: Another one that falls into the “near miss” category, Miami hurt itself with three offensive zone penalties (good catch, Starman) and finished 4-for-6 overall shorthanded.

It’s really tough to win on the road when you give a team six power plays including a 4-on-3.

Taking the second period off didn’t help. The RedHawks were outshot, 16-4 in that frame and allowed a pair of unanswered goals that put WMU ahead for good.

And yes, Melnick’s unexpected absence hurt Miami in multiple areas, but the Broncos were without one of their best as well in Wade Allison.

As has often been the case recently, the RedHawks were right there all night and didn’t give up.

But they didn’t quite do enough to win.