Once again No. 20 Miami felt short by the slimmest of margins.

The RedHawks lost by one for the second straight night, 3-2 at No. 14 Western Michigan on Saturday after dropping a one-goal decision the night before.

Matthias Samuelsson fired in the game winner from the high slot early in the third period after Western Michigan had taken two previous one-goal leads, only to have Miami answer both times.

The RedHawks were without standout Josh Melnick for the second straight night, and regular starting goalie Ryan Larkin also did not play. 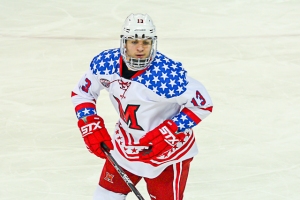 RECAP: Western Michigan (13-6-1) won an offensive zone faceoff and Cole Gallant dropped a pass to Josh Passolt, who whipped it past Miami goalie Jordan Uhelski 2:12 into the game.

The RedHawks tied it with 5:43 left in the opening frame when Ben Lown skated in on the right wing and centered a pass that hit a skate and caromed to Derek Daschke, who was wide open in the slot and slammed it home. 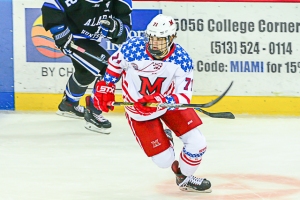 With 6:51 left in the middle stanza, Colt Conrad fed Passolt on a 2-on-1 for a one-timer that put Western Michigan back on top, 2-1.

Miami again pulled even when a 2-on-1 became a 2-on-0 as the Broncos’ lone defender, Cam Lee, blew a tire in his defensive zone. Jonathan Gruden took a pass from Brian Hawkinson and after his initial shot was denied, he poked it past goalie Trevor Gorsuch with 1:26 remaining in the second period.

But Western Michigan regained the lead for good as a well-placed wrister by Samuelsson from between the faceoff circles beat Uhelski with 14:35 left in regulation.

STATS: Passolt scored twice and finished the weekend 3-1-4 as he is almost certainly on his way to a weekly league award.

— Lown ended the night with a team-best two points, both on assists for his first multi-helper game of the season and the second of his career.

— Daschke scored for the fourth time this season, tying him with Grant Hutton for the team lead among defensemen, and Gruden’s goal was his second of the season, as he has four points in his last six games.

— Opponents have scored against the RedHawks in 13 straight periods.

— Both teams had three power plays but only 2:11 of time on the man-advantage. That’s because twice after Miami took penalties, WMU was whistled for a minor of its own within seconds.

THOUGHTS: Miami didn’t play badly at all, especially considering it was in a hostile arena against the hottest team in Division I, but once again the win didn’t come.

WMU deserves a lot of credit for the weekend sweep, as the Broncos are flat-out impressive in every aspect, and it’s easy to see why they’re second in the NCHC.

Western Michigan was ranked No. 14 coming into this weekend and was unbeaten in its previous eight. Make that 10 now and watch that ranking go up on Monday.

— Daschke’s line was impressive enough – one goal, six shots, three blocks, only Miami skater with a plus-rating – but he was a defensive menace to WMU all game, poking loose pucks away and getting his stick in the way of passes. Plays well beyond his 22 collegiate games. 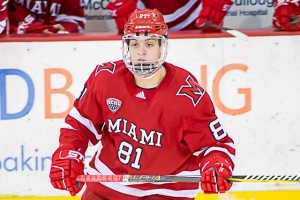 — Speaking of defensemen, River Rymsha was a standout in this game by laying out a couple of huge hits and playing great shut-down defense.

— Hutton has stepped his level up the past few games at both ends of the ice. He has four assists in his last four games and has played better in his own end as well.

— Uhelski in net was a major surprise. Was this a message to the team that it was too reliant on Larkin to make big saves, or are they pacing Larkin, who has already logged roughly 5,000 minutes as a RedHawk and been banged up several times during his Miami career?

Uhelski made a phenomenal save on a breakaway and was solid overall.

— Melnick remained out with a lower body injury. Hopefully it will not linger into the upcoming four-game homestand.

Coach Enrico Blasi likes to have his lineups pretty well set around this point of the season, and with the exception of Melnick and Larkin, this looks like the 20 he will head into the stretch run with.

STANDINGS: Miami dropped to sixth in the conference at 3-5-2, leading just Omaha and Colorado College.

The RedHawks slipped to No. 26 in the PairWise, which determines which teams earn at-large bids to the NCAA Tournament. Miami would need to climb to 14th or better to warrant consideration.

FINAL THOUGHTS: Despite a lot of the positives surrounding the program, the winless streak is becoming unwieldy.

The RedHawks are at .500 for the first time since opening night, which isn’t going to get them into the NCAA Tournament, regardless of how difficult their league schedule is.

The effort is there, the passion is there, the process is there, and while those are all great things, the wins still need to be there at the end of the season or else this team will once again be done playing by St. Patrick’s Day.

I've been writing about hockey since the late 1990s. First it was the Cincinnati Mighty Ducks and the Cincinnati Cyclones for the Cincinnati Post, and most recently with WCPO and the Blog of Brotherhood online.
View all posts by rednblackhawks »