No set of euphemisms can shield the obvious: Minnesota-Duluth has owned Miami the past few seasons.

If there’s good news for Miami it’s that the lone win during its current drought vs. UMD came on home ice last season.

And the RedHawks have defended their home rink well this season, going 6-2-2 at Cady Arena.

BoB takes a look at the upcoming series between these teams:

NOTES: Duluth is one of the best defensive teams in Division I.

The Bulldogs allow very few shots, and the overwhelming majority of those are snagged by goalie Hunter Shepard.

Minnesota-Duluth is tops in the conference in goals allowed (41) and seventh in the NCAA defensively at 2.05 goals against per game.

Opponents average just 23.0 shots, and the Bulldogs’ defense corps consists of five sophomores and a junior with another junior between the pipes.

Second-round pick Scott Perunovich leads all defensemen in points (18) and the entire team in assists (16).

Blueliners Nick Wolff, the lone junior in this corps, and Kings draftee Mikey Anderson also have offensive ability, as Wolff is 2-7-9 with 62 penalty minutes, and Anderson has scored three times.

Shepard led the Bulldogs to the national championship last season by allowing just five goals in four NCAA Tournament contests. He posted a 1.91 goals-against average in 2017-18 and is at 1.92 this season.

Shepard’s GAA is eighth-best in college hockey and he has a save percentage of .916. He has played all but 16 minutes in net for Minnesota-Duluth this season.

Up front, Justin Richards’ emergence has been a major storyline for the Bulldogs. He leads the team with 12 assists and 19 points, and he has also scored seven times, including a pair of game winners.

The sophomore had zero goals in 44 games last season and finished with nine helpers.

Parker Mackay is team captain and one of the top two-way players in the conference. He has a Bulldogs-best eight goals plus eight assists for 16 points.

Only three other UMD forwards have 10 or more points. Senior Peter Krieger is 2-12-14, Wild draft pick Nick Swaney has six goals and six assists, and Tampa Bay selection Cole Koepke has a pair of markers and eight helpers.

Minnesota-Duluth has two more NHL draft picks among its forwards. Riley Tuftes was Dallas’ first-round choice in 2016, and Noah Cates was taken by Philadelphia in 2017.

The Bulldogs are the top penalty killing team in Division I at 92.0 percent, as they have surrendered just six power play goals.

This weekend series is the front half of a four-game homestand for Miami, which is mired in an eight-game winless streak.

With their record at .500 for the first time this season, the RedHawks need to start winning games if they hope to earn home ice in the NCHC Tournament and eventually qualify for the national championship tournament.

Gordie Green is starting to heat up, which is great news for Miami, as he has scored three goals in three games. 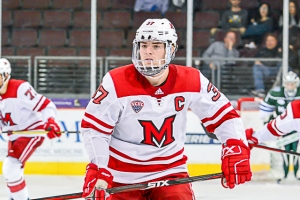 Co-captain Josh Melnick missed both games last weekend with a lower body injury, and there’s no certainty he will play in this series.

Goalie Ryan Larkin did not play the finale in Kalamazoo last week but is expected to play against UMD.