Devin Mantha logged his fourth season in the SPHL, and despite playing just 32 games, he tallied 18 goals and 21 points for his best career points-per-game ratio in the pros.

Mantha, whose father is former NHL-er Moe Mantha, has scored 63 goals and dished for 86 assists for 149 points in just 170 games with Mississippi since 2013.

Max Cook finished the season with 11 goals and 13 assists in 47 games with Fayetteville, and rookie Andrew Schmit tallied six goals, 16 assists and 91 PIMs in 55 games with Pensacola.

EUROPE: Only four former Miamians suited up for European teams in 2016-17, and F/D Matt Tomassoni led ex-RedHawks in points with 32 on seven goals and 25 assists in 41 games with Frankfurt.

Ryan Jones scored 19 goals for Cologne, which plays in the the top league in Germany. 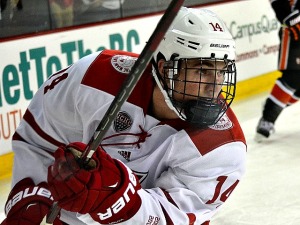 Cody Murphy tallied 12 goals and 15 assists in 42 games for Bjorkloven (Sweden), and Mike Glumac – in his 15th pro season – went 8-8-16 for Zagreb in his fourth season with the Croatian-based KHL team.

PLAYOFFS?! PLAYOFFS?!?!?!?!? – No former Miamian playing in the SPHL or Europe was able to enjoy a late playoff run.

Schmit and Cook notched a goal and an assist in four games in their respective series, as both saw their teams eliminated in the first round. Cook dished for an assist in two games and Mantha picked up a helper in three contests, as his team also exited the playoffs early. 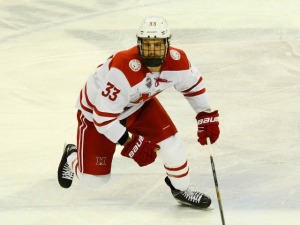 MILESTONES: Despite being limited to seven games, Jones tallied his 200th professional point last season. He needed just three to reach that mark and finished with a pair of goals and two helpers. That give him 121 pro goals and 90 assists between the NHL, AHL and Europe.

Glumac has now logged 921 games between the ECHL, AHL, NHL and Europe. Now the elder skatesman among former Miamians in the pros, he has 297 goals and 262 assists for 559 career points over 15 seasons.

A look at all RedHawks that appeared in other leagues this season: